Frank Lloyd Wright’s Talliesen West, or at least the curator staff, makes use of found objects on the vast property in the right place. Maybe FLW did as a touch of whimsy, too.

Once you live in the desert, our own whimsy is kind of fun.

At least the non-venomous kind. But if that whimsy is placed outside, never, never bring it back inside. Never! 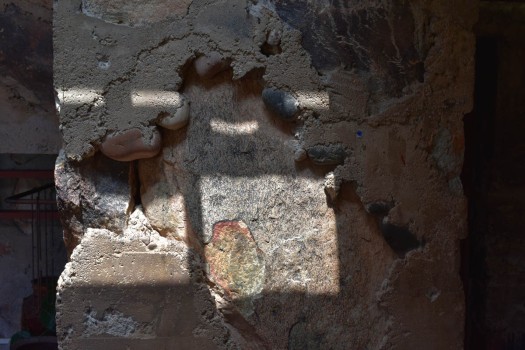 Perhaps it’s a southwestern desert thing, to embed rocks, keys, or jewels in poured concrete. But I like it.

This is what Loree might use in a spare dish on a layout table, if she were a teaching architect inviting her winter students into the layout room. Joints from the ever-vicious Cylindropuntia biglovii. 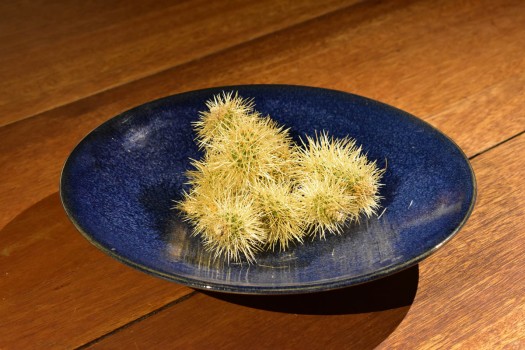 “This is going to hurt you more than it will hurt me, interns!”

A large Acoma pot behind the other pot. There was more than one Kachina doll around the house, which I had in my previous home’s decor by themselves. 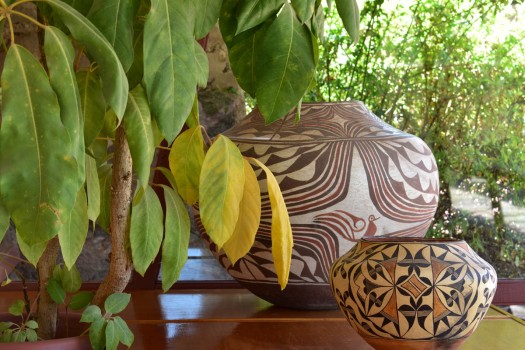 Even a Mammilaria cactus growing out of a gritty wall gap, and it’s alive! 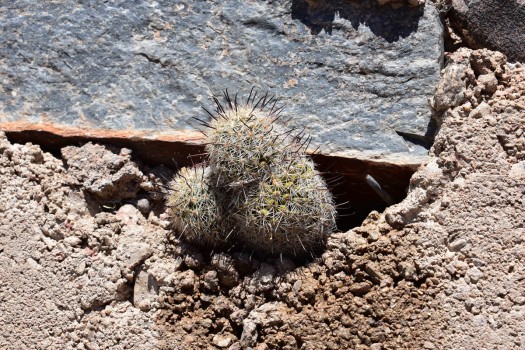 The docent was talking about it being an Ocotillo, so hopefully her FLW knowledge is tighter! Who knows?

Do you collect objects around your garden or wild areas, then incorporate them into your decor?

I must admit, I have some blue rocks from my area’s once-active volcano, but no ideas where to use them. Mostly no objects to salvage once I move back, just sand!

You can click on many of my images to enlarge. Unless noted, all are mine; thanks for *not* reusing images or content. Feel free to do so with credit to me or simply by asking.

Weather at End of Posts

If the day’s weather and my post relate, I extrapolate nearby weather conditions for my house. That date’s high and low temperature with any precipitation are listed.

That’s supplemented with my old Nikon Coolpix S3700 handheld camera or iPhone 7, and rarely I use a print from the scan function on my HP Officejet 7612.

I do minimal or no processing, treating light and shadow as my friends. Working in the desert, I often have to shoot into intense sun and shadow, or the blinding midday light.

No matter what, I first capture the big picture before any details.